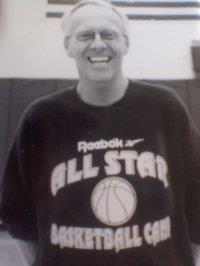 Jim Tuck was a long-time teacher and coach in the Marcus Whitman community. After a long, hard-fought battle with cancer, he passed away in March of 2005. He was a friend to many and will never be forgotten.

During his 54 years he ran countless 5K and 10K races, one mile fun runs, triathalons and even the NYC marathon several times. Jim was a fierce competitor in just about everything and the competitive spirit has been passed on to his children and the student-athletes he inspired over the years.

Do you have a heart of iron? Do you embrace Jimmy Valvano's famous quote "Don't give up,don't ever give up"?  Come test your mental and physical toughness with fellow racers on March 23rd as we renew Jim's competitive spirit with a 5K run in his memory. He will either be running ahead and motivating you to run faster, whispering a motivational speech in your ear or pushing you up those final hills. Don't pack those running shoes away over these next  few months and get ready to join us in the sixth annual Hearts of Iron 5K! All proceeds to benefit The V Foundation for Cancer Research, Roswell Park Cancer Institute and the Ronald McDonald House of Rochester.

Last year we had 86 brave finishers and raised $3,400 for our foundations.  We would love to surpass that amount this year. This is the 7th year of the race and we would like it to be our most successful year yet - both in the number of participants and the amount of money raised for the charities.  Our first year we had 134 finishers and that is the number to beat! Recruit your friends and set a goal to be there on the 23rd - walk, run, both, but cross that finish line!

Our course is certified to be accurate by USATF #NY13124KL, we will have a professional timing company and we have online registration.